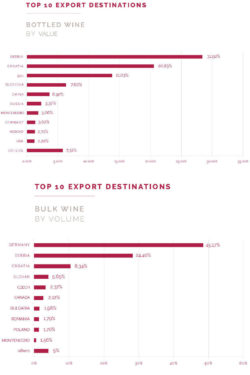 REGION
– North Macedonia is in the C3 area of the oenological map (other regions include Mediterranean France, Corsica, Southern Italy and Spain)
Adding sugar is prohibited

Climate
North Macedonia is centrally placed in the southern Balkans and has both Mediterranean and Continental influences, with warm, dry summers and autumns. Temperatures can go up to 45 °C, especially in July and August. The nights are much cooler and winters are temperate. The annual rainfall is between 440 mm and 740 mm. With 260 days of sunshine per year, the local factors are very good for winegrowing. Long dry spells are particularly problematic in the central Vardar region.

The region´s viticulture goes back 4,000 years, as shown by wide archaeological evidence, in the form of pictures, reliefs and sculptures, that can be found in museums.

Alexander the Great (356-323 BC) is Macedonia’s most important historical figure. The ancient Greek city-states on the southern border saw the Macedonians as primitive barbarians not to get involved with. Such perception changed when Alexander defeated them, one by one, on the military fronts. He then went on to conquer countries far beyond, from Egypt to India, in a historically unique campaign.
As in Greece, wine and drinking were popular in ancient Macedonia. Alexander regularly lost self-control and even stabbed one of his closest friends with a lance while inebriated.

Wine from the region was also popular in the Roman Empire. Vineyard areas grew along with export volumes. Garrison settlements had a wide leisure offering. Soldiers could go to the amphitheatre after work or kill time in the tavern with dice games. Remains of the bar furnishings can still be seen in the archaeological site of Stobi.

Under the Orthodox Christianity that followed the fall of the empire, red wine played a central role in liturgy as a symbol for blood of Christ. Monasteries also improved winegrowing and winemaking technology.

Turkish rule, from the 14th to the 20th century, brought wine production to an almost total standstill.

Tikveš was the first modern winery to open in 1885 and soon became a symbol of technical innovation with high-end resources such as a semi-automatic bottling plant.

As a result of the phylloxera plague and the two world wars, the industry had to essentially be rebuilt from scratch in 1945. Only then did Vranec plantings start in the Yugoslav Republic of Macedonia. The plant material was brought from Montenegro, where it performs equally well, but in a much smaller area.
Until the 1960s, an estimated 14,000 hectares were under vine. The region’s production met two thirds of Yugoslavian needs. At the time of the Declaration of Independence in 1991, an estimated 39,000 hectares were planted, and the state-owned farms moved to private hands. The existing equipment was of little use in the international context.

The Macedonian ethnicity and language are now lost. Present-day northern Macedonians are of Slavic and Albanian ascent. The country’s borders do not correspond to pre-hellenic Macedonia either. This was one of the reasons why Greece did not acknowledge North Macedonia as an indepent state for a long time.  However, even the Greek region of Macedonia can claim neither geographical nor ethnic continuity. Fortunately, the conflict is now resolved.

The largest investments in Northern Macedonia have been made by Greek investors. The influx of capital has allowed the region’s large companies to get sate-of-the art technology, and even invest in innovative equipment. The entire sector is increasingly well-positioned.