This article is available in the following languages:

World’s biggest line-up of wines and spirits in Düsseldorf, Germany 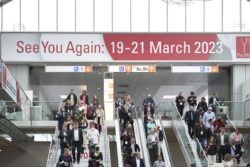 Preparations for ProWein from 19 to 21 March 2023 are in full swing. The registration deadline for exhibitors is over, the space allocation talks with the individual vintners, joint participations, im- and exporters as well as spirits suppliers are running at full steam. One thing is already certain: ProWein 2023 will follow on from the success story of the past 28 years and confirm its leading role as the world’s biggest and most relevant trade fair for wines and spirits once again. “The international product spectrum at ProWein is unique and offers professionals from food retail, specialist retail, food service and catering the unique opportunity to gather comprehensive information, scout and order new trends,” affirms Michael Degen, Executive Director Messe Düsseldorf, and adds “It is this extremely broad international base on both the supply and demand side that is ProWein’s USP.” In excess of 6,000 exhibitors from over 60 countries will be showcasing their ranges in 13 halls of the Düsseldorf Exhibition Centre. 19 October will see the exhibitor database go live at www.prowein.com.

Who will be at the ProWein 2023?
As good as all wine-growing nations will be represented at  ProWein in March 2023. Australia, New Zealand and South Africa – which were not represented at this year’s fair owing to Covid – will again present themselves with joint pavilions to the global audience. Also on site will be other New World nations and/or regions such as Argentina, Chile, China, the USA with California. The European wine nations – be they represented by growing regions, individual vintners or vintner cooperatives – will also be leveraging ProWein: Germany, France, Greece, Italy, Austria, Portugal, Switzerland, Spain, Hungary, and many other East European nations such as Georgia, to name but the top ten.

ProWein: sets the scene for brands
Where else if not at ProWein – you might ask? With its flawless special-interest exhibition concept and great international reach on the visitors’ part, ProWein is the ideal platform for brands, producers or major wine dealers and importers from all over the world such as Allegrini Estates, Constellation Brands, Enobis, Fratelli Martini, Henkell Freixenet, Les Grands Chais de France, Mack & Schühle, Penfolds, Semper idem Underberg, Schlumberger, Familia Torres and the VDP, for example.

ProWein & ProWein World: a strong network
After the pandemic-induced, forced break ProWein 2022 has impressively ‘dialed back in’. The face-to-face format with personal exchange, live tastings and a comprehenisve programme of accompanying expert events is hard to beat. This is also confirmed by the key data of ProWein 2022: with 5,724 exhibitors from 62 countries and more than 38,000 trade visitors from 145 countries it proved the pivotal industry event and THE international business platform in 2022. ProWein started in 1994 with 321 exhibitors from eight countries and reached its preliminary climax at the 25th anniversary in 2019 boasting 6,900 exhibitors from 64 countries and 61,560 visitors from 143 nations.

No less successful are the satellite events of the ProWein World in Asia and South America. This years sees four of the five trade fairs in total feature on the agenda:

For current infromation on ProWein as well as press photos visit  www.prowein.com.